Take Your Listeners on a Nightly Journey with Caravan To Midnight

Hosted by the legendary John B. Wells

Caravan To Midnight with John B. Wells Debuted on December 1st with 21 stations signing on in the first month.

In announcing the launch of Caravan To Midnight, show host John B. Wells shared, “The nightly show launch is like coming home in a way. Over the air radio is where I started. It’s my first love. It’s immediate, demanding and therefore really exciting. Every show is a canvas waiting for the oil. Great radio is art, and I treat every episode as such.”

Wells has been hosting his LIVE Saturday night program Ark Midnight since April 2016, but stated, “One night a week on radio with Ark Midnight was just the beginning of something much bigger. Our fans can’t get enough, our affiliates want more, and quite frankly… talk radio needs this program to thrive at night in the New Year and beyond.”

Wells adds, “The audience response to Ark Midnight has enabled us to register in the Top 20 most-listened-to talk programs, with only one weekend show per week. If that’s any indication, we’re about to do very well by broadcasting every weeknight.”

John B. Wells often shared that his shows are, “Part of a renaissance in radio — quality content, that is fun, slightly eccentric, but not heavy on the air. We bring an introspection our audience truly appreciates. We have a team of analysts that offer invaluable insight.”

Talk Media Network CEO Josh Leng offered that “John B. Wells is an expert in weaving stories, news, and interviews together with an artful thread and his instantly recognizable voice.”

After frequently serving as a guest host on Coast to Coast AM, John B. Wells became the Saturday evening host of the most-listened-to overnight radio program in North America in January 2012. Wells has a vocal delivery & presence currently unmatched in talk radio syndication. He’ll have your listeners hanging on for the next syllable and every tidbit of curious information.

Caravan To Midnight with John B Wells entertains & informs with discussions on news and current events, conspiracy theories and all things curious and unexplained.

It’s a ride unlike any other… one you don’t want to miss. Don’t wait to join the growing Caravan To Midnight… because once your competition does, it will be too late.

Once the sun goes down, there’s simply no equal to Caravan To Midnight with John B. Wells. 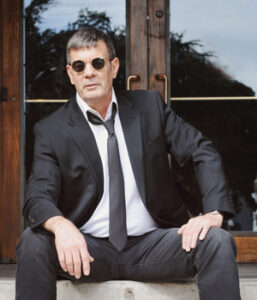 Upon graduating from TCU with a Bachelors Degree in Fine Arts and an emphasis in theater, he took a part-time job at the legendary KZEW-FM/Dallas-Ft. Worth, where within less than a year, he moved into the afternoon drive slot and posted record ratings.

Wells was heard for nearly a decade on BBC Radio 1 in London, along with HIT 95 in Berlin, Radio ADO in Paris, and many others around the world. In addition to serving as the announcer for CBS’ The Late Late Show with Craig Kilborn and the “World’s Leading Dance Event” Sensation in Amsterdam, Wells has lent his voice to Oliver Stone’s JFK and Talk Radio films and appeared in several other movies. He narrated all four seasons of Unsealed: Alien Files on History Channel, and numerous Department of Defense project productions. Wells has also recently voiced promos for Discovery Channel’s Deadliest Catch and Gold Rush. Actor, musician, writer, composer, martial artist, aviator and his most passionate focus…. broadcaster.

JOHN B. WELLS IN THE NEWS

Host In Syndication Since: April 2016