The Radio Show Devoted to Flying and the Aviation Lifestyle!

The world’s first and only nationally syndicated radio show devoted to the aviation lifestyle and learning to fly! Just Plane Radio soars onto radio stations throughout the U.S. each week, as the JPR crew navigates the latest aviation news and information, often combined with an irreverent twist. Listeners (referred to as the passengers on the show) can participate by calling, e-mailing or web chatting with their Captains.

Just Plane Radio is the show that fuels Americans’ love affair with flying. 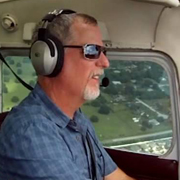 Greg is the radio guy we’re attempting to transform into a private pilot. A perpetual pilot in training, Greg is definitely taking his time to enjoy the process. However, if this idiot can do it, anyone can… his own words.

Greg started his radio career on the air in Cincinnati back in the 80s. Sounds like a TV show ya think? He’s worked in rock, pop, country, talk radio formats on stations from Ohio to Florida and has pretty much done it all in the radio world. 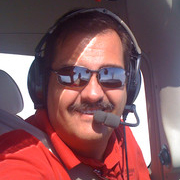 Ed Comisky first got interested in flying at the age of 8 when he saw a picture of a WWII fighter airplane on the cover of a Boy’s Life magazine. It was a picture of a F4U Corsair. The article on the inside of the magazine described how a group of pilots had restored this old warplane to original condition and flew it in airs shows around the country. From that point forward all he wanted to do was to FLY!

Ed started flying at age 15 from a grass runway cut out of the corn fields of Central Illinois. He soloed an airplane at age 16 and became a Private Pilot at age 17. In 1986, while attending the University of Illinois, Ed became a Flight Instructor and has been actively teaching since then.

He holds Flight Instructor ratings for teaching in Single and Multi-Engine Airplanes. He is also rated to teach Instrument Flying. In 2004 he was one of the first instructors to become a Cessna Factory Authorized Instructor on the New Garmin 1000 equipped airplanes. Most recently he was designated by Cessna as an Authorized Instructor in the Cessna Covalis and Covalis TT.

Ed has been involved with managing flight schools for the last 21 years. His experience ranges from establishing a small Cessna Pilot Center to managing a staff of 200 instructors and 120 airplanes at four locations with approximately 700 students. Ed also taught and managed the University of Cincinnati’s Aviation Technology Degree Program. He has remained on the education side of aviation all of these years because he truly enjoys sharing his passion for flying with other aviation enthusiast.

Greg started his radio career on the air in Cincinnati back in the 80s. Sounds like a TV show ya think? He’s worked in rock, pop, country, talk radio formats on stations from Ohio to Florida and has pretty much done it all in the radio world. 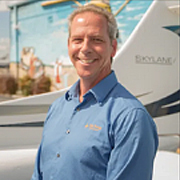 As a small child, Keith dreamed of being a pilot. He was fascinated by airplanes and finally began flying when he was 16 years old. He went on to get his private pilot and instrument ratings and loved to take to the skies whenever he had the chance. In 1994, Keith decided that it was time to make his passion for flight into a career and enrolled in the Delta Connection Academy.

It wasn’t until after graduating from the Academy and becoming a flight instructor that Keith realized he had a knack for teaching and actually enjoyed it!

In 1996, Keith’s dream of becoming an airline pilot became a reality and he flew for Comair Airlines for 12 ½ years. While at the airline, he was able to continue his love for teaching by working for 6 of those years in the training department as a ground school instructor and simulator instructor.

Keith currently holds an Airline Transport Pilot Certificate and is able to instruct in single and multi-engine aircraft as well as teach the instrument rating. He holds type ratings in the Brasilia, Cessna Citation, and Canadair Regional Jet. 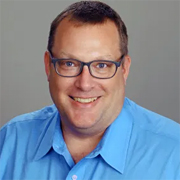 Dennis had always been fascinated by airplanes. Growing up only 5 miles from the former Duluth Air Force base he would watch the military and civilian airplanes fly over his house, dreaming that one day he would get to fly himself. On his 15th birthday he rode his bicycle to the airport for an introductory flight in a Cessna 150. Upon graduating High School Dennis joined the US Air Force/MN Air National Guard where he reached the rank of 1st Lieutenant. During college Dennis started working part time at the Duluth Sky Harbor Airport. It was there that he earned his pilots license in 1988. Dennis graduated college with Bachelors of Science degree.

In 2014 Dennis dipped his toes into aircraft ownership by joining a flying Club. It was during this time he began to appreciate the increased freedom club membership provided versus hourly rental. It was due to the flying club that he finally earned his Instrument Rating.

It was also with the flying club that Dennis’s Son Austin soloed and eventually earned his Private Pilot license. Austin is currently a student at MN State University Mankato and is majoring in professional aviation. Austin is a Commercial Pilot.

After 3 years of flying club membership Dennis’s wife convinced him that he should buy his own plane. With that not so gentle nudge Dennis became the proud owner of N1163Z, a 1982 Mooney 201.

Dennis recently earned his CFII (Certified Flight Instructor – Instrument) and is preparing to move to Florida with his Mooney (& family), where he can fly more often.

Just Plane Radio is often sponsored by the following types of advertisers: