New To The Street

New To The Street

Learn About The Businesses of Tomorrow, Today.

Listen to the Demo

Where do your listeners go to learn about the latest and greatest companies impacting the world around us?

If your answer was a destination other than your radio station, you NEED New To The Street in your lineup.

Meet the people behind the companies

New To The Street with Jane King is a weekly 1-hour program that profiles C-Suite innovators, CEOs and Founders to showcase where they are at and how they grew their companies to get there.

New To The Street paves the way to the latest financial issues, offering a blend of business and financial services news reporting and in-depth interviews relating to new products, economic analysis and public company profiles.

New To The Street begain airing nationally in 2014, and is also recognized as a leader in blockchain information and news delivery.

By adding New To The Street, you are making your station a resource to your listeners who are always searching for new and useful information they value, to make important consumer and financial decisions. 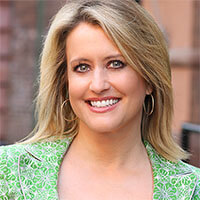 Jane King is an experienced financial journalist, and has been providing daily broadcast reports from the NASDAQ Marketsite since 2014. Previously, she had been reporting from the floor of the New York Stock Exchange, providing live, syndicated business and financial reports for Bloomberg News. Before joining Bloomberg, Jane covered local Business News for CNN's Newsource division, CNN Marketsource. Earlier in her career,Jane worked as a business reporter for WPVI-TV in Philadelphia and as an anchor and reporter at WAND-TV in Decatur, Illinois. King began as a reporter for WLFI-TV in Lafayette, Indiana. Outside of journalism, King also has served as member and floor trader for the Chicago Board of Trade and as an Adjunct Professor of Broadcast Journalism at Purdue University. Jane grew up in the Midwest in Indiana and graduated from Purdue University with a degree in Telecommunications. She lives in the world's financial epicenter, New York City, with her husband, son, and daughter.