THIS Is The Week In Review Show You Need

Michael Harrison is engaging and draws listeners in for more…

The Michael Harrison Wrap is a refreshing review of what’s hot!

The Michael Harrison Wrap is a dynamic overview of the national conversation about the hottest issues and stories discussed that prior week on talk media (radio, TV, internet). Resourcing the research of broadcasting trade journal TALKERS magazine and hosted by radio industry icon Michael Harrison, the program features interviews, analysis and opinions from a variety of voices covering a diverse array of political and social ideologies.

What Program Directors will notice immediately when they listen to The Michael Harrison Wrap, is the amount of preparation that goes into each and every episode. Combine that with the ‘best in the business’ talk radio hosts who contribute to the timely and topical news discussions, and you have an on air product that features a great group of broadcasters who bring their ‘A’ game for the audience to enjoy. 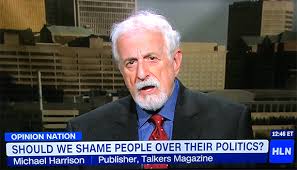 Michael Harrison has served as the editor and publisher of TALKERS, the leading trade publication in the American talk media industry for the past 30 years. In that capacity, he has become widely recognized as one of America’s leading authorities on radio, communications, and public opinion as it is expressed in the media as well as being director of the annual TALKERS Convention held in New York City for the past 23 years.

Harrison graduated from Hofstra University in 1971. He is a charter inductee in the Hofstra Radio Hall of Fame and sits on the university’s Lawrence Herbert School of Communication Dean’s Advisory Board. Still dynamic after a 52-year career as a broadcaster, he is a pioneer and innovator in both talk and rock radio as well as being a driving force in the industry’s trade publication field.

He was the founding architect and first program director of the progressive rock format that launched the legendary WLIR, Long Island to national fame in 1970, while still a student. He went on to become the ground breaking morning host at historic album rocker WNEW-FM, New York shortly after graduation and served as a professor teaching Music & Contemporary Culture at New York University.

Harrison has also been an air personality or on-air program director at such stations as KMET, Los Angeles; KPRI, San Diego; WZLX, Boston; WCBS-FM and WPIX, New York; WTIC, Hartford and others. He owned and operated one of the early talkers of the modern era — WSPR, Springfield, MA. He currently finds time in his busy schedule to guest-host talk shows at WRKO, Boston and WTIC, Hartford, which he describes as “a labor of love.”

He has written about, defined, predicted or engaged in hands-on programming of major movements in radio’s evolution from coining new format terms to the development of music and talk-topic chart methodology. Among his inventions is the term “AOR” (Album Oriented Rock) which he coined in the early 1970s, while programming KPRI, to describe the more commercially-accessible brand of “progressive rock” radio that remained a dominant format for more than 40 years. Today, it is called “classic rock.”

He has hosted and produced national radio programs syndicated by ABC Radio Networks, Westwood One, CBS Radio, MJI Broadcasting, RKO Radio and more. These include the legendary “Album Greats: The History of Album Rock,” “The Great American Radio Show,” “Mike Harrison’s Rock Connections” and “Backstage at the Grammys” among others.

Harrison served as the first managing editor of Radio & Records during its formative years and radio columnist/record chart consultant for Billboard in the early 1980s.

He was one of the first media analysts to predict the rise of podcasting before the term was widely known, not to mention serving as Program Director of the first radio station to have its own website.

MICHAEL HARRISON IN THE NEWS

A fascinating conversation about Rush and talk radio on Pastor Will Marotti’s show on WTIC
February 4, 2020